The focus of our research is not purely on single-family home areas, but rather on the areas of the “unplanned” suburban regions, also known as periphery, peri-urban zones and/or Zwischenstadt (Sieverts, 1997). These urbanised fragmented and hybrid landscapes are characteristic of forms of residential areas “in which single-family home areas are adjacent to farming areas, and where car showrooms, shopping centres, and equestrian farms are located next to little woods, criss-crossed by motorways and railway tracks lined with noise walls, and where you cannot tell where one city or town ends and another begins”. (Vicenzotti, 2011, p. 15)

Heterogeneous zones (Sieverts 2005, Hauser 2006) that are integrated into cities over time and that are currently being combined to form urban regions (ÖROK, 2015) are the subject of controversial discussion in academic and planning circles. Vera Vicenzotti reviewed the history of this discourse in her publication Zwischenstadt-Diskurs: Eine Analyse zwischen Wildnis, Kulturlandschaft und Stadt (2011) [The Zwischenstadt discourse. An analysis between wilderness, cultural landscape and city]. She categorises the countless views of the Zwischenstadt into three ideological patterns of opponents, enthusiasts and qualifiers. Within such a grid, Intensified Density operates at the level of the qualifiers: “The fundamental attitude of the qualifiers is a positive assessment of suburbanisation processes and the reality of the urbanised landscape. Despite this essential recognition, however, it also detects deficits, particularly with regard to possibilities and conditions of urbanity and quality of life […]”. (Vicenzotti, 2011, p. 87)

Selected project areas are investigated and evaluated with quantitative and qualitative methods as part of the Intensified Density research project. The spatial analyses of the potential areas, the sociocultural environment, building stock, and tangible, existing needs to be fulfilled by the specific selected places are performed by surveying qualities, infrastructure, buildings, stocktaking, etc., in some cases on site. Demographic data and empirical research, for example from the survey of quality of life indicators in the city of Graz, are also incorporated in the analysis.
This data is used to derive general criteria for redensification, for utilising free spaces within an existing development and to analyse spatial and social redensification potentials. The aim is to identify potential locations and sites, primarily leftover plots or unused building land in suburbs / Zwischenstädte / peripheries that are of relevance for the questions under examination in the research project.

Due to the basin topography of Graz, the Zwischenstadt or “peri-urban space” is shifting southwards into the open Graz-Leibnitz Field. To the north, the area is topographically limited to the access roads Weinzöttlstrasse and Wienerstrasse in the Mur valley.

Until the mid-19th century, the suburbs of Graz, the Murvorstädte, as they are known, including Geidorf in the area around the Leechkirche and Guntarn-Hof by the Leonhardkirche, Jakomini around Jakominiplatz, St. Leonhard, Gries around Griesplatz, and Lend around Lendplatz, were characterised by sparse development. The rural building structure is still visible in the cadastral communities of Graz and in the districts of Liebenau, St. Peter, Waltendorf, Ries, Maria Trost, Andritz, Gösting, Eggenberg, Wetzelsdorf and Straßgang that were incorporated after the National Socialists seized power in 1938. 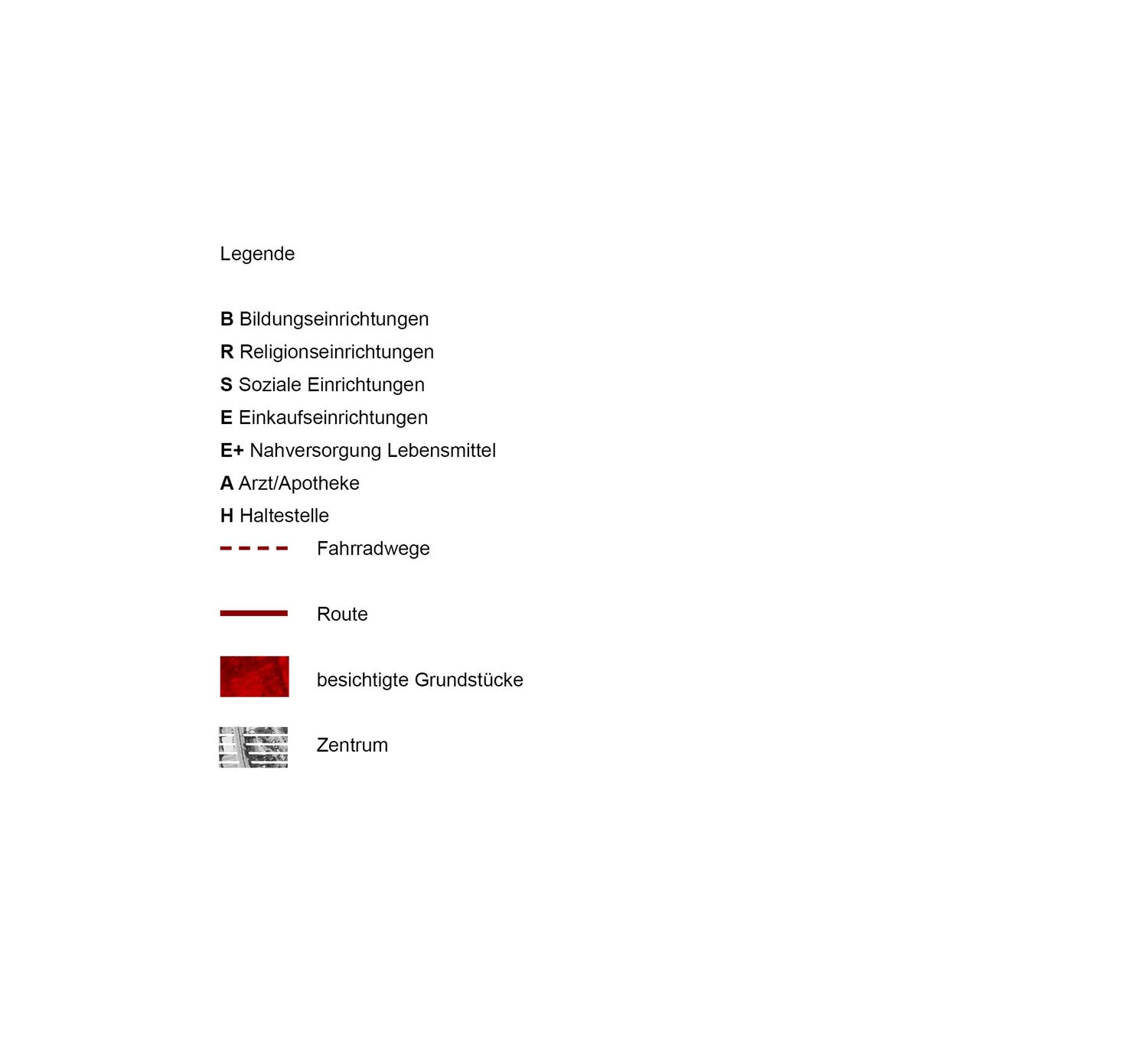 The search for sites in urban Graz was performed by subtracting and limiting the potential area under review on a map of the city. A search was then conducted for sites based on seven routes and multiple inspections of different parts of the city, assessing them based on their potentials and classifying them as leftover areas, gap sites, brownfield sites, sealed surfaces, or developed areas available for densification. This also allows to generate an overview of existing or utilisable potential areas in the area under examination.

In terms of planning, the selected areas were overlaid with existing infrastructure (centres, doctors/pharmacies, educational, religious, shopping, social facilities, groceries shops) and analysed. For each route, around 1–4 plots were selected for in-depth consideration, depending on their available potential based on the given criteria.

The key criterion for choosing sites was a centre or potential centre in the immediate surroundings. All infrastructural facilities required for everyday life, e.g. accessibility to public transport, pharmacy, doctor, groceries shop, educational facility, etc. were required to be within walking/cycling distance. The surrounding area was to be heterogeneous and display mixed use with residential areas – not a purely residential/commercial or industrial area – and thus have different social and economic potential for joint use of industrial/commercial waste heat, for example. Furthermore, the site was to already be developed in terms of infrastructure (electricity, water, sewage system, etc.). Also, the site was to be a brownfield site or leftover area with sealed surfaces (car parking spaces, building stock, etc.) and no larger than max. 3000 m². Developed areas with buildings available for additional storeys, e.g. car parks, etc., or gap sites, do have great potential but are not considered for our research project at this initial stage.

The city has a sufficient supply of sealed surfaces showing adequate potential for redensification so that there is no need to seal any existing green areas.

This study/field research revealed that the city has a sufficient supply of sealed surfaces such as car parking spaces (not in use 24/7), single-storey or two-storey buildings (including car parks) that could have additional storeys added, etc. As such, there is adequate potential for redensification so that there is no need to seal any existing green space. Graz must act when it comes to protecting green space in large parts of the urban space. Numerous (mill)streams and smaller streamlets crisscross the city that could be a positive factor in terms of quality of life. They are, however, currently unkempt and thus unattractive and in urgent need of revitalisation, also with regard to climate change and constantly rising temperatures in the city. There are also large areas classified as building land. The closer the edge of the city, the larger these areas are and the fewer gap sites are available. Primarily open development exists that appears disordered and unplanned and in need of action in terms of urban development.