How can we approach the complex topic of peri-urban space? And can we use this consideration to develop methods that are equally relevant to design and planning processes in these areas? The following contribution sets out to clarify the concepts involved in the topic of broadacre cities and urban sprawl.

As a result of industrialisation, rural exodus and due to migration, technological and political change, many large cities in Europe changed in form and, above all, grew in size in the late 19th and early 20th century. Suburbs with their own centres were absorbed by the main body of the city, major industrial and commercial enterprises and municipal infrastructures set up on the edges of cities, in some cases only to move away again. Brownfield areas remained that were later replaced by new functions and uses in another subsequent phase of urban renewal. The wealthier classes moved to the city centre or more well-situated leafy districts. The middle class increasingly came to settle on the outskirts, moving to large residential estates in designated urban expansion areas or migrating to more outlying localities that grew into “commuter belts”. Meanwhile, these suburban zones have attracted new uses and functions beyond mere hosing and continue to grow.

How can we approach the complex topic of peri-urban space?

Since the 1990s, more and more large out-of-town commercial zones have been growing up in mid-sized European cities too, with electronics or specialist store centres appealing to a primarily car-driving section of the population knitting together with constantly expanding detached house areas to form metropolitan urban regions, cannibalising previously rural areas.

The seemingly unending advance of urbanisation has also led to a change in the discourses. While the binary view of urban and rural space was characterised by modernist models and ideals, recent discussions of the phenomenon of urban sprawl have also developed views that go beyond the binarity of city and countryside. (Qviström 2013:435)

Although suburbanity can still be interpreted in terms of centre and periphery, networks, including network cities, are more akin to heterarchies, with lateral links and lateral movement patterns. […]What is more, the network nature of the sprawling city interacts with the network traits of the main supply systems, particularly the infrastructures of energy transport and telecommunications. (Stichweh 2005:505) 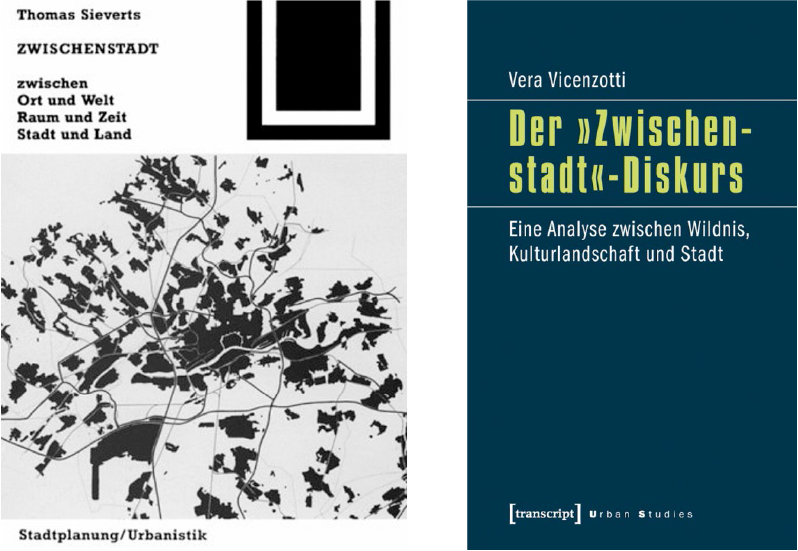 Thomas Sieverts coined the term Zwischenstadt, or “in-between city”, in 1997.
The Zwischenstadt phenomenon is extremely complex both as a concept and as a reality, being subject to numerous different interpretations. Zwischenstadt describes forms of settlement that have evolved as a result of the dissolution of compact cities and their spread into the open landscape. Zwischenstadt means the urbanisation of landscape and the landscaping of the city. “These urbanised fragmented and hybrid landscapes characterise forms of settlement in which single-family home areas are found adjacent to farming areas, where car showrooms, shopping centres, and equestrian farms are situated next door to little woods, criss-crossed by motorways and railway tracks lined with noise walls, and where you cannot tell where one city or town ends and another begins.” (Viczenzotti, 2011:15)
The Zwischenstadt represents a kind of “para-aesthetics”. It requires “widening our view and reconsidering to the chaotic wealth of forms of the Zwischenstadt – that is commonly regarded as being ugly.
“One must first study the Zwischenstadt, gain knowledge of its rules, and hone one’s eye for its peculiarities before one can take action in terms of successful and respectful design.” (Vincenzotti 2014)

The term peri-urban space was coined in the European context, in France and in Switzerland. As a common denominator of different authors, peri-urban space can be defined as the interface between urban and rural space within the “urban shadow” (Qviström 2013:427), that is to say, the zone of influence of a city outside of the suburbs. Characteristics are mixed (rural and urban) use of land, hybrid uses, the prospect of future development and real property speculation, continuous change from productive land use towards postproductive land use and attendant conflicts, suboptimal institutional structures, and poorly developed infrastructures.
Alternative interpretations of urban sprawl were called for in the last of the 20th century, demanding that the chaotic multifunctional landscape required a new perspective (Shoard 2000, Gallent et.al 2007, Meeus and Gulinck 2008). There were also calls for a kind of analysis that breaks away from the bicultural (i.e. rural–urban) perspective (Qviström 2013:435).