The second selected plot that complies with our research criteria with respect to existing infrastructures, besides the one on Fabriksgasse (District of Gries, Graz), is in the District of Gösting. It is located on a side street off the Wienerstrasse, one of Graz’s major access roads, leading from there to the centre of the historical Gösting village.

Due to its proximity to Interspar shopping centre, the plot’s location can be described as central. The building site is situated on a narrow strip between Wienerstrasse and the raised railway embankment and along Wienerstrasse, where there is a mixture of commercial and residential buildings. According to City of Graz Urban Planning Department, this area is designated as a local centre. Currently, the plot of land in question is accessed via the narrow side of the plot on the Wienerstrasse. Due to the fact that the Thalerbach stream flows along the longer side of the plot, it lies somewhat beneath the street level of Exerzierplatzstrasse. There is a bus stop on the corner of Exerzierplatzstrasse and Wienerstrasse. 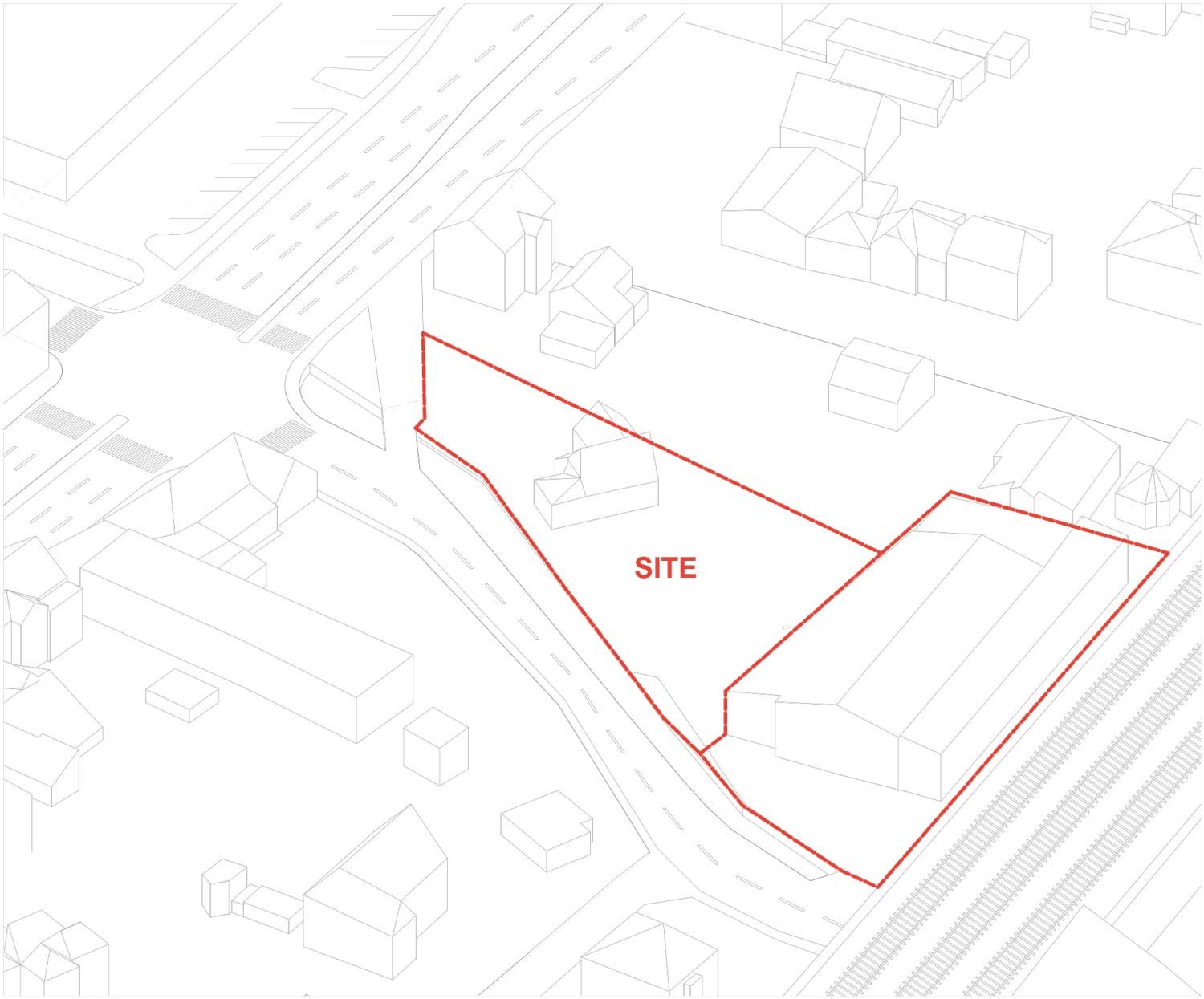 From an urbanistic perspective, the plot lies within a development area that, was largely settled since the end of the Second World War. Along the main access road, the Wienerstrasse, there is a predominance of car-friendly commercial buildings due to the high amount of traffic in the area. Individual single-family homes and other residential buildings can also be found along the road. Both to the west and east, residential blocks from the 1960s and 1970s, set back from the street, characterise the streetscape due to their size. Recently, a new village complex consisting of various blocks of flats, shops and other amenities – the Wohnpark Gösting – was built behind the railway embankment. The area has access to public transport (bus) connecting it to the inner city of Graz. In this area, the principle of the functional city (Athens Charter 1933, German translation 1962) is again discernible; it is characterised by the segregation of a mixed fragmented urban structure through the functional separation of living and working quarters.

“View to Wohnpark Gösting and high voltage power lines. Top location with access to public transport and other amenities in the north of Graz situated amongst old romantic buildings.”

Here too, similar to the plot on Fabriksgasse, low, village-like buildings alongside commercial and residential buildings are confronted with the urban density of residential blocks (vertical city).

Based on the Learning from Las Vegas research paper (1968) by Venturi/Scott Brown/Izenour, a spatial urbanistic investigation was commenced by conducting field research on a walk through the area. In an area where cars play the main role and all errands are run by car, there is a lack of cycle paths and pedestrian connections, e.g. to the newly erected Billa supermarket at Wohnpark Gösting on the other side of the railway embankment. Photographs were taken of the impressions gained and then analysed.