An urbanistic concept analysis for the above-named plot in the district of Gösting was carried out analogous to the first selected plot on Fabriksgasse. In both cases, findings from the analysis were discussed by the entire research team and, as a consequence, a number of design rules were defined.

An analysis of the historical development of the said planning area revealed that the area in question had remained undeveloped until the end of the 19th century, when a few town houses, tenements and a factory were initially built on the stretch of land beside the millstream behind today’s Interspar shopping centre. Accordingly, there is no architecture worth preserving that would create identity.

The area under consideration surrounding the selected plot on the Exerzierplatzstrasse is located in direct proximity of the city’s main northern arterial road, the so-called Wiener Strasse, which is lined chiefly by commercial buildings as well as single-family houses. Since the Exerzierplatzstrasse provides an important connection to the historical centre of Gösting district on the other side of the railway embankment, our location also offers fruitful ground for linking living and working in the sense of the “mixed and productive city” (cf. Europan 14, 2017).

There is no further necessity to develop new spaces for carparks – no underground garage.

The area around the selected plot is enclosed by the Wienerstrasse and railway embankment. Above all, the raised railway embankment represents more than a mere visual barrier. Principally, building density in the quarter is lower and the proportion of green space is higher due to the predominance of single-family homes. The overground proportion of car parking areas is extremely limited – and there are hardly any public car parks. Interspar shopping centre possesses a substantial number of underground and overground parking spaces that are chiefly occupied during working hours and whose spatial potential could be optimised by enhancing overall management. Car traffic plays a dominant role in the streetscape’s design. The as-built plans reveal that there are neither continuous public green areas for recreation and sports, nor playgrounds. There is a lack of designated footpath and cycle path networks, especially on the other side of the embankment. Thus, the urbanistic principle of short distances remains largely unfulfilled.

Provide green spaces and public connections for pedestrians and cyclists.

Analogous to the plot on the Fabriksgasse, there is a marked lack of pedestrian and cycle paths and networks in our planning area and car traffic is prevalent. A direct comparison reveals that although there is a higher quantity of green space due to single-family housing, no publicly accessible green areas offering quality recreation facilities are available. The green areas alongside parts of the railway embankment lack any kind of pathways. The following concepts will take both problems into account.

Do not build too high.

The heterogeneous area under consideration contains single-family homes, residential blocks from the 1960s and 1970s, more recent multi-storey housing blocks as well as commercial buildings and a shopping centre (Interspar) from the end of the 20th century. As regards height development and density, above all, the three residential blocks to the east and west of the plot dominate the area. Reconstruction should therefore seek to reconcile those differing scales.

In a heterogeneous area such as this, it seems especially important to create a centre that will connect the existing fragmented dwelling quarters, integrate the quarter beyond the railway embankment and enhance the quality of the footpath and cycle path network as well. This will result in improved accessibility to the car-focused local supplier (Interspar).

The “Quality of life indicator model” (LQU-Modell, 2013), which is a comprehensive, urbanistic, demographic and social survey of the City of Graz consisting of objective information and subjective population opinion surveys, suggests that there is an urgent need for action in the planning area Gösting 13-1 as regards the cost of living, followed by the job situation, co-existence and healthcare services, as well as with respect to recreation and leisure time. The living situation in this particular district and the related question as to whether people are happy to live there scores 90.3% for the entire Gösting district, i.e. the bottom third in comparison to other districts. Some 40% of people living in the area in question would like to move away. What is needed from an urbanistic perspective is increased accessibility to the city centre, workplaces, recreation areas, sports facilities and green areas as well as a functional network within the quarter for pedestrians, cyclists and public transport, especially to the area beyond the railway embankment. Thus, in terms of planning our concept, we need to pay specific attention to topics such as neighbourhood, integration, quality of public space, affordable dwellings and creation of possible work spaces. Despite the high proportion of commercial businesses along the Wienerstrasse, people criticised the lack of jobs in the area.

Possible uses and new jobs that need to be created in our planning area have emerged from the LQI model’s survey as follows: doctors’ surgeries, a counselling and care centre, assistance for elderly people and organisation of homecare services and assisted living facilities, a care and retirement home and adult education facilities. Furthermore, space for associations and their activities, organisation of a farmers’ market (or a farm produce shop) and emergency services (ambulance, police force, fire brigade) are required. Besides that, there is a notable lack of barrier-free dwellings and offers of and available, accessible local recreational and sports areas. 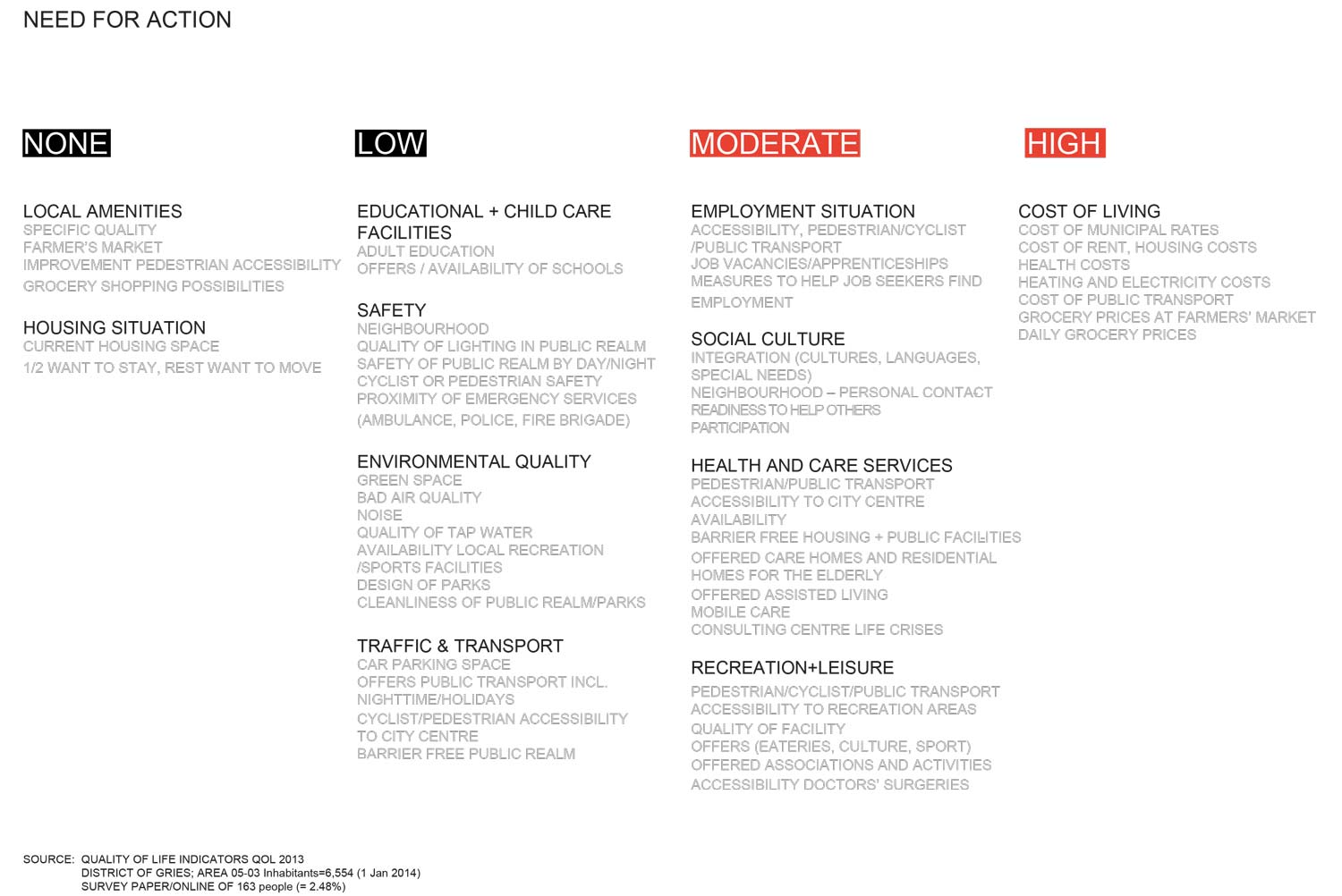 Learning from ... other places