In accordance with urbanistic practice, information (plans, studies, etc.) was researched, analysed and prepared for the design process in parallel to our field research. On the basis of the analysis and within the frame of the discussion in the research team, initial design parameters and design-specific determinants emerged which were defined in the form of design rules.

The century-old village-like structure around Karlauerplatz is characterized by some very old buildings such as the bakery, which was established in 1733, and the building on Karlauerplatz 46, which, from 1701 on accommodated a leather manufacturer, and from 1891 to 1896, Johann Puch’s bicycle factory. In the 19th century, commercial and industrial factories began to settle along the Mühlgang millstream, a process that is reflected in the name of Fabriksgasse. Essentially, those old buildings with their characteristic appearance not only establish identity but are also historical places of remembrance in the urbanistic context and should therefore be preserved.

The area of interest around the selected plot on Fabriksgasse contains a multitude of residential and commercial uses, as well as one religious cultural institution. Some of the buildings around Karlauerplatz accommodate commercial facilities in the ground floor zone with apartments on the upper floors. In the same way, we aim to maintain connection between living and working in the sense of “the mixed and productive city” (cf. Europan 14, 2017) on the Fabriksgasse plot and to test it in various ways in our concepts.

Provide green spaces and public connections for pedestrians and cyclists.

Most noticeably in the planning area is the lack of thoroughfares and networks for pedestrians and cyclists, and thus, a subsequent lack of continuous green spaces with recreational quality. Both of these issues will therefore be taken into consideration in our following concepts.

There is no further necessity to develop new spaces for carparks – no underground garage.

The area around the selected plot near Citypark is characterised by a high percentage of impervious surfaces due to building stock and sealed surfaces (roads, car parks). Moreover, the shopping centre possesses a high proportion of parking spaces (multi-storey car parks) in the quarter that are not used to 24/7 capacity and whose potential surface area could be optimised by improving their management. Hence, the figure-diagrams show that there is a significant lack of continuous green spaces. Instead, residual spaces such as traffic islands are prevalent, and there are no parks, playgrounds and sport facilities. Traffic clearly dominates the streetscape’s design, especially with regard to feeder traffic to Citypark shopping centre, which is exclusively tailored to car traffic, with a lack of designated footpaths and cycle path connections. Here, the urban short-distance principle has been disregarded.

Do not build too high.

Essentially, the density of a plot is representative of a certain historical period and its prevailing urbanistic ideals. In the heterogeneous area under consideration, visible are, amongst others, remains of Biedermeier village structures, parts of a 19th century perimeter block development, residential blocks from the 1960s and 1970s and commercial buildings, as well as a shopping centre from the end of the 20th century.
Density is limited to 2.5 in Styria according to provincial building density legislation. Specifications regarding density vary somewhat depending on the size of the city, town or province. In practice, a number of different calculation models are used within Austria: e.g. in Salzburg, the floor area ratio is calculated, while in Styria, only a wall thickness of up to 30 cm is taken into account for the gross floor area. By contrast, density is not calculated in Vienna at all; instead, the maximum building height is specified. Furthermore, density is always a question of scale. In Graz, with a population of around 280,000, buildings are principally much lower and have less storeys than in Vienna with a population of 2 million.
As regards building height development and density, Citypark shopping centre and a few residential blocks south of the plot dominate the area under consideration. Reconstruction should therefore reconcile those differing scales.

In a heterogeneous area such as the one in question, it seems particularly important to strengthen the existing fragmented residential quarters. Here, smaller structures connecting dwelling units and shared spaces, etc. could be especially effective. Neighbourhoods and quarters work well when certain territorial structural elements (zonings, clarity and infrastructure) are given, often in comfortable sizes and units, as first described by Jane Jacobs as ‘Defensible Space’ in 1961 and later elaborated on by Oscar Newmann in 1972.

Since 2006, the City of Graz has compiled a by now fairly comprehensive Geographic Information System, also known as “quality of life indicator model” (LQI-Modell Graz). The system is available online and provides information about urbanistic, demographic and social situations on the basis of regularly gathered objective data and subjective opinion surveys. That way, in smaller areas within the districts of Graz (in this case, Gries 05-3), local people can be asked as to what action should be taken in terms of satisfaction and importance relating to eleven indicator groups.
It follows that our planning area requires urgent action as concerns safety, environmental quality and the cost of living, and a moderate course of action as regards the housing and employment situation and co-existence. The housing situation and, connected to that, the question of whether people are happy to live in their particular quarter is the lowest in Graz at 75% in the Gries district. In comparison, people’s satisfaction with living in the neighbouring district of Lend scores 85%, which is much higher. As a result, only one-third of the people living in Gries district would like to remain there. The cost of rented accommodation and lack of job offers in the district also meet with criticism. From an urbanistic view, it would be desirable to improve connections to the city centre, workplaces, recreation areas, sport and green spaces and to improve infrastructure within the quarter for pedestrians and cyclists as well as public transport. What that means in practice for planning our concept is that topics such as neighbourhood, integration, quality of public space, but also affordable living and creation of possible working spaces require sufficient attention. In general, people criticise the lack of jobs in the area despite the nearby Citypark shopping centre.

Possible uses and jobs that need to be created in our planning area have emerged from the survey of the LQI model as follows: Organisation of a farmers’ market (or a farm produce shop), adult education centre, emergency service centre (ambulances, police force and fire brigade), doctor’s surgeries, cultural and event offerings (theatre, cinema, concerts, etc.) and eateries. There is also a lack of barrier-free dwellings and of available accessible local recreational areas and sports facilities. 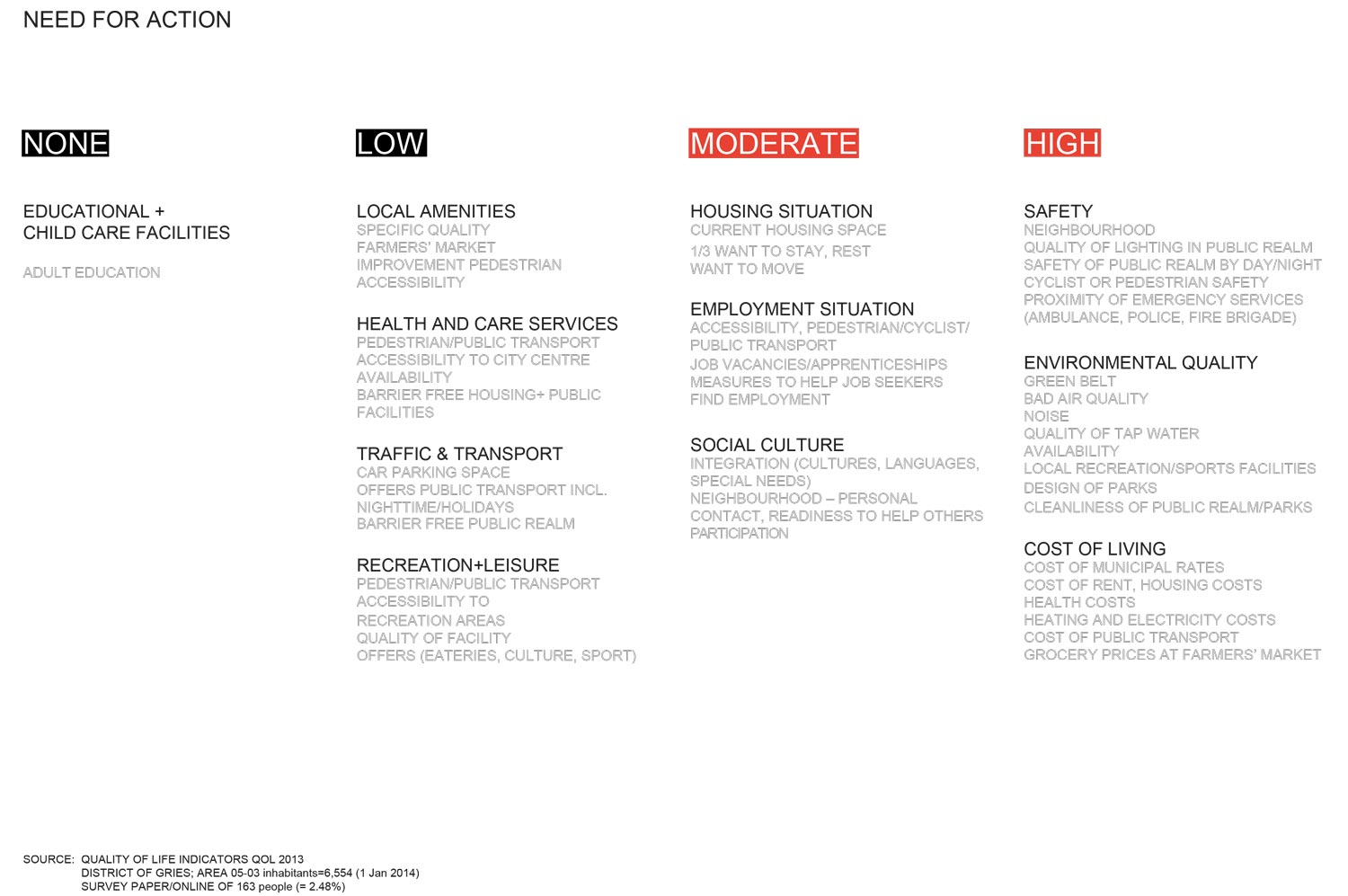